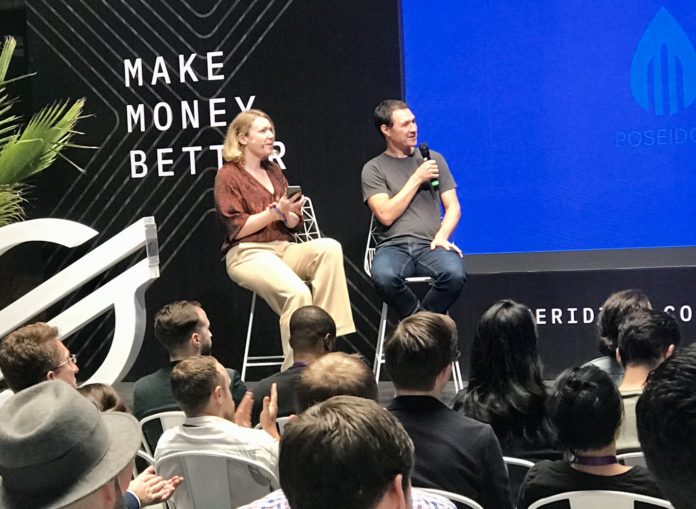 MEXICO CITY – There’s a mobile app approved by the Mexican government that lets 20,000 migrant workers in the U.S. pay bills back home over the Stellar network.

That’s according to Marco Montes Neri, the creator of the Saldo app, which relies on peso-backed stablecoins. “Stellar has created a set of protocols and a set of standards to handle all these regulatory obligations,” he said, adding:

“If you want to touch real people’s money, you really need to play ball with regulators.”

This theme came up again and again at the Stellar Meridian conference this week in Mexico City, with roughly 350 people, most of whom were building on Stellar, in attendance. Embracing financial rules seemed to be a defining theme; Facebook’s “move fast and break things” was not the mantra.

“Making sure Stellar is useful for actual people” was always the goal, said Jed McCaleb, who created the cryptocurrency in 2014. “That will ultimately always come back to some sort of regulatory situation … we don’t avoid it.”

McCaleb now serves as the chief technical officer of the Stellar Development Foundation (SDF) at a time when the race over blockchain-based global payments is increasingly crowded. In 2012, McCaleb co-founded Ripple, which now focuses on cross-border bank transfers, but in recent months Facebook’s Libra project has pushed talk of crypto remittances under the regulatory microscope.

Stellar’s advantage is that it’s already here and moving – with a built-in compliance layer just above the protocol itself. This allows users to plug into a common set of know-your-customer (KYC) and anti-money laundering (AML) standards.

Neri said that makes Stellar helpful for a business like his in a way that, say, ethereum does not.

“In other ledgers, that layer doesn’t exist yet because it hasn’t been the focus,” Neri said. “You can build it, but the problem is that it’s not compatible with another project that wants to do the same thing.”

SDF CEO Denelle Dixon says she doesn’t want to just help people cope with regulations; she wants to go to rule-makers and show them how blockchain technology is making the world a more orderly place. Said Dixon:

“We need to actually focus on getting more regulators involved.”

Cole Diamond, CEO of CoinSquare, a crypto exchange in Canada, told the Meridian crowd that “the majority of us went and trailblazed with our regulators.”

Diamond said his company actually left a lot of money on the table by leaning into his province’s laws. As fellow Canadian exchanges crumble, he doesn’t regret it.

“I can’t suggest strongly enough the importance of doing that,” Diamond said.

Pavel Matveev of Wirex, a startup for global crypto-to-fiat value transfer, told the assembled Stellar fans, “It’s actually quite risky not be regulated.”

Though no one disputed that governments tend to be frustratingly slow. Amit Sharma, CEO of FinClusive Capital, which makes a compliance-as-a-service platform, urged founders to proactively approach policymakers with ideas.

Ernest Mbenkum, founder and CEO of Interstellar Wallet and Exchange, holds out hope. “Governments, they can’t resist it forever,” he said. “At the same time, they are going to want to be able to control it. It’s an interesting dance.”

How central banks see it

There’s one way that nation-states could embrace crypto with unsettling consequences for the industry: by putting fiat currencies onto a blockchain.

“If central banks decide to issue a CBDC [central bank digital cryptocurrency], it’s going to be in token form, and it’s going to be delegated,” Francisco Rivadeneyra, a research advisor at the Bank of Canada, predicted on stage Tuesday morning. A delegated CBDC means partners will help the bank to manage consensus and track payments, in some way similar to blockchains like EOS and Libra (as currently envisioned).

Linda Schilling, a professor of financial economics at Ecole Polytechnique in Paris, said:

“The rise of cryptocurrencies has in some ways pushed central banks to think about how to compete.”

She believes central banks understand that if any cryptocurrency becomes globally adopted, it will allow citizens within a nation-state to opt-out of a central bank’s policies. Users who could use crypto for a significant portion of their economic lives would be shielded from a bank’s plans for managing inflation or economic growth.

But if central banks beat crypto companies to the punch and start taking over peer-to-peer payments, an enormous amount of data will accrue to what are, in the end, political institutions.

“As you move toward central bank currency, you move much more toward a business model like Facebook and Google and so on,” she said. Among other things, political appointees would have far too much information about voters, dissidents and political rivals.

Of course, the proposal that has spurred the most gesticulating from central bankers has been Libra, the cryptocurrency proposed by Facebook in June.

“It’s fair to say that all the noise associated with Libra had a kind of negative effect,” said Wirex CEO Matveev.

For his part, McCaleb told CoinDesk he thinks Mark Zuckerberg and his Libra lieutenants don’t really understand what they are getting into.

“Their approach seems a little bit arrogant, at least from an outside perspective. The way they announced it seemed a little bit premature.”

McCaleb said Libra doesn’t look decentralized enough to him and he doesn’t believe the founding partners will ever fully decentralize it, though he acknowledges he has a bias there. Libra is attempting to build at scale essentially the same global payments network SDF has already built.

But Mbenkum, the founder of Interstellar Wallet and Exchange, argued that Stellar’s advantage for reaching the unbanked is not its cryptocurrency, XLM. Rather, it’s the system of “anchors,” the Stellar lingo for companies making asset-backed tokens on the network.

McCaleb is hopeful, too, though he knows progress is slow. He pointed to Saldo’s peso-backed stablecoin and another anchor in Nigeria that is slowly building a following by helping people get money in and out.

McCaleb seemed actively reluctant to oversell it all, but he did offer this:

“It seems like we are on the cusp of these things actually making people’s lives better.”