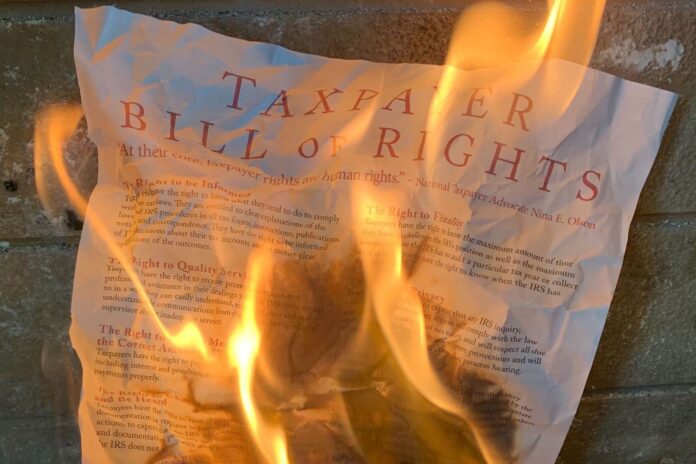 Cryptocurrency users in the U.S. remember July 26, 2019, as the day the Internal Revenue Service (IRS) came out swinging. It now turns out the agency may have been hitting below the belt.

That day, for the first time in its history, the IRS demanded thousands of virtual currency-holding taxpayers fess up to unreported crypto trading gains.

“We have information” on your cryptocurrency accounts, the agency warned these presumably tax-flouting taxpayers in a so-called “soft letter” that took an oddly hard line for being a compliance-promoting mass mailing. What this “information” was or how the IRS had gotten it was left unexplained by Letter 6173.

More clear was this: If these taxpayers did not refile their tax returns, address the apparent crypto discrepancies or, if they believed themselves already compliant, meticulously explain how and why in a sworn response, the letter warned they could be referred for “an examination” – an audit.

The letters did not spell out to these taxpayers that they were not yet under IRS examination. America’s Taxman wanted answers – and it wanted them in 30 days or less.

Crypto and Taxes 2020: Wednesday is this year’s deadline for Americans to file their tax returns, and cryptocurrency users’ obligations are as confusing as ever. This series of articles explores the complex issues facing digital asset investors.

Crypto Taxes: Still Confused After All These Years

Hodlers Can Donate Crypto to Charity to Minimize Tax Payments

Nearly a year later, the agency’s own Taxpayer Advocate Service is alleging that letter violated the Taxpayer Bill of Rights, adopted by the IRS under pressure from Congress.

The little-noticed controversy over Letter 6173 is part of an emerging struggle over codified rights supposedly guaranteed to every federal taxpayer in the United States. It also comes as the IRS mounts a distinct but intimately related campaign to enforce cryptocurrency tax compliance across all sectors of the cryptocurrency space.

In 2014, the IRS adopted 10 U.S. Constitution’s Bill of Rights-like safeguards in an attempt to educate and protect a U.S public skeptical they had any rights before the IRS, according to WeiserMazars LLP. The Taxpayer Bill of Rights is codified in the Internal Revenue Code.

According to Erin M. Collins, the National Taxpayer Advocate, an independent office within the IRS that combines the roles of an ombudsman and a public defender, Letter 6173 ran roughshod over those rights.

“The Code, Congress and the IRS have repeatedly acknowledged taxpayers’ rights and protections, and this letter not only does not provide them — it undermines them,” Collins wrote in her “2021 Objectives Report to Congress,” released June 29. Collins heads the IRS’ nearly 2,000-strong team of independent advocates.

The virtual currency letter smashed through two tenets of the Taxpayer Bill of Rights – the right to privacy and the right to be informed – when it ordered taxpayers who were not under audit to submit examination-esque information to the IRS, she argued.

The Code, Congress and the IRS have repeatedly acknowledged taxpayers’ rights and protections, and this letter not only does not provide them — it undermines them.

Among Letter 6173’s demands: the taxpayer’s entire crypto trading history; a “statement of facts”; an explanation of how they got their crypto books clean; and copies of tax documents from 2013 through 2017, even though the statute of limitations caps the number of reviewable years at three. Recipients had 30 days to submit the sworn package “under penalty of perjury,” the letter said.

The IRS and the Taxpayer Advocate Service did not respond to individual requests for comment. But tax experts interviewed by CoinDesk generally agreed with Collins’ assessment of the letter.

“It does sound a little ominous,” said Mark Mazur, director of the Urban-Brookings Tax Policy Center. “Normally, in my experience, soft letters are softer in that the deadlines are, you know, indefinite – in the future or something. But this one does seem a little tougher.”

Collins called that ominous toughness “disturbing” in her congressional report. Letter 6173 “appears to be a threat directed at taxpayers who believe they are compliant,” she said, and identified it as part of a larger pattern of the IRS using soft letters to “bypass” examinations and the procedural protections they afford.

She requested the IRS remove the examination-like demands from Letter 6173 and a second unrelated soft letter on the grounds they violated compliant taxpayers’ right to privacy and right to be informed. The IRS refused.

Observers familiar with the space told CoinDesk the IRS’ soft letter was not likely a targeted attack on crypto users.

Letter 6173 was only the most aggressive variant in a trio of soft letter types the IRS sent to more than 10,000 suspected crypto holders in the summer of 2019, but the only variant that included explicit evidentiary demands (the IRS did did not provide a breakdown of how many of each type of letter were sent out).

“The IRS thought, ‘I’m doing you a favor because instead of coming after you with a very serious accusation, a notice saying you owe me this money, I’m helping you along to comply,’” he said.

Part of the reason such favors would be necessary at all is the tax system’s general incompatibility with cryptocurrency markets. It only began defining its treatment of the space in 2014.

Mazur, the tax policy expert, worked at the Treasury Department when it issued its 2014 cryptocurrency tax guidance, which he acknowledged had a rather limited scope.

The 2014 guidance “didn’t do much more than say, ‘buying and selling virtual currency leads to gains or losses.’ It’s income. And then the analogy was like trading physical commodities,” he said.

But that analogy failed to account for the diversity of investment types, outcomes, potentialities and novelties that are rampant in crypto space but wholly absent from traditional markets, like hard forks and air drops. Five years passed before the IRS issued its second, more expansive guidance (two months after Letter 6173).

Add to that the simpler fact that crypto traders can quickly bungle documentation as they move their cryptocurrencies between exchanges and wallets, creating intricacies that even the most adept record keeper may be hard pressed to follow, said Brown. This, plus the emerging nature of the space, makes a soft-touch, soft-letter approach all the more important.

But the letter’s hard-line language towards compliant taxpayers becomes even more perplexing when read through that lens. The notice’s harshness blurred the line between soft inquiry and examinations, Brown said.

Collins said in her report to Congress that the Taxpayer Advocate Service will “continue to work with the” IRS on eliminating these types of demands from soft letters, even though the agency has already refused such requests.

Taxpayers who received Letter 6173 and have not already settled could bring Collins’ argument up as evidence in court, said Mazur.

“It could potentially lead to litigation from taxpayers who, if they’re in a dispute with the IRS for not fulfilling the request from this letter, could say, ‘Oh no, this letter is a violation of the Taxpayer Bill of Rights.’”

Read more: IRS Crypto Summit Was About the Exchange of Ideas, Not Tax Guidance

“You’ve filed a tax return [and] you’ve already signed under penalty of perjury that the information that you gave was accurate,” he said. “So this second, sort of out of nowhere, unrequired but sort of implied threat of ‘well if you don’t file this, well, what are you signaling,’ it just puts the taxpayer in a Catch-22.”