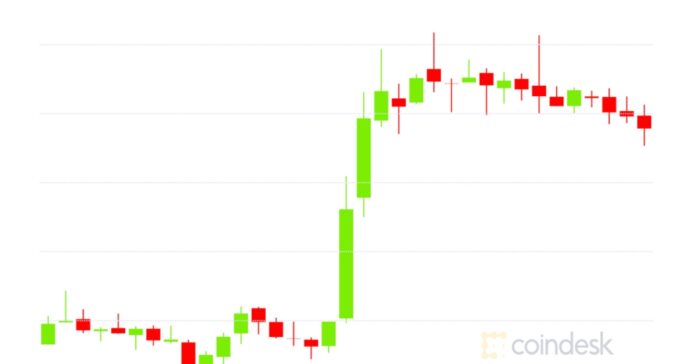 Bitcoin’s price is making gains Friday, rising as high as $11,111 on spot exchanges such as Coinbase before settling to $10,050 as of press time.

The last time bitcoin hit Friday’s $11,111 price level was back on Sept. 19. This recent run-up has been helped by exuberant market-related news, Lifchitz added. “Bitcoin was looking for a catalyst and partly found it Thursday when Square announced [it] bought … $50 million worth of bitcoin, and today when President Trump tweeted that a [COVID-19] relief financial package was back on track,” Lifchitz said.

Indeed, positive news, combined with short-oriented trader liquidations in the derivatives market, have helped push bitcoin higher. Over the past day, over $20 million in buy liquidations dominated the much-maligned BitMEX exchange, versus a paltry $1 million in long wipeouts, the equivalent of a margin call in the cryptocurrency world.

Constantin Kogan, a partner at crypto fund of funds BitBull Capital, notes spot volumes have been picking up, which could provide fuel for a further price upswing. “The spot market is very active,” he said. “From here we could see a potential bullish rise up to $13,000.” Volumes on major spot exchanges Thursday hit $371 million, much higher than the $277 million daily average over the past month. So far Friday, spot volumes are at $288 million.

“I’m happy to see bitcoin break $11,000,” said Henrik Kugelberg, a Sweden-based over-the-counter trader. Kugelberg said many traders will swap poorly performing alternative cryptocurrencies, or altcoins, for more bitcoin, but that trend won’t send price skyrocketing. “I do have some hope it may lie around $10,500-$11,500 during Q4 as more money will move from altcoins to bitcoin – bullish, but no bull run this year I would say.”

Read More: Opinion – Ethereum Is Manhattan and Everyone Is Moving to the Suburbs

Ether options traders on Deribit, one of the largest crypto venues in terms of daily volume, prefer betting at the $400 price point. According to Deribit data aggregated from Genesis Volility, options traders currently have over 75,741 ETH options on a $400 strike price, tops on the exchange. This is followed by 71,989 ETH on a $200 strike in second place, followed by 65,159 ETH on the $280 price point.

Greg Magadini, chief executive officer of Genesis Volatility, says the options market has seen a lot of $400 calls lately. “The $400 price point has become an inflection point for ETH recently,” he told CoinDesk.

Conversely, Magadini sees lots of puts on $200, although that price level hasn’t been touched on the ether spot market since way back in May. He added that “$200 is less logical as $250 is a more tested level, but for whatever reason the market likes being short $200 puts more.”