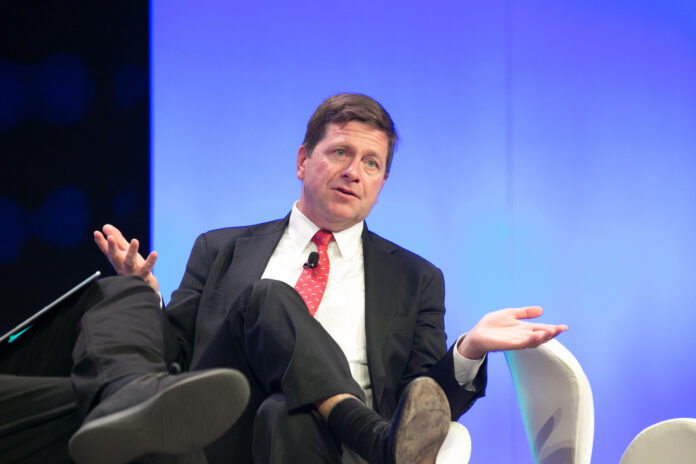 U.S. Securities and Exchange Commission (SEC) Chairman Jay Clayton may be the next U.S. Attorney for the Southern District of New York.

According to a Department of Justice press release published late Friday, Clayton was nominated by U.S. President Donald Trump to helm the prosecutor’s office, three years after he first took on the role as chairman of the nation’s top securities regulator. Clayton’s term as chairman was slated to expire in 2021.

The press release said current SDNY U.S. Attorney Geoffrey Berman would be stepping down, but he denied plans to resign in a statement late Friday.

“I have not resigned, and have no intention of resigning, my position, to which I was appointed by the Judges of the United States District Court for the Southern District of New York,” Berman said in the statement.

Meanwhile, in a statement attributed to Attorney General William Barr, the DOJ announced that U.S. Attorney for New Jersey Craig Carpenito would serve in the Southern District role on an interim basis starting July 3, until Clayton is confirmed by the U.S. Senate.

According to Stephen Vladeck, law professor at the University of Texas School of Law, it is possible Berman can continue serving until Clayton is confirmed. However, Martin Lederman, a former Deputy Assistant Attorney General and current law professor at the Georgetown University Law Center, said on Twitter Trump can remove Berman, but Barr cannot.

Preston Byrne, a partner and attorney with Anderson Kill, told CoinDesk that the issue surrounding this question is whether the provisions addressing appointments and firings conflict. In his view, “they only conflict if appointees can’t be fired.”

“Notwithstanding that (and notwithstanding arguments for prosecutorial independence), the President is of course granted executive authority which – at least customarily – includes the authority to fire U.S. Attorneys under Article II of the Constitution,” he said.

Barr’s statement did not indicate who might replace Clayton at the SEC helm.

“For the past three years, Jay has been an extraordinarily successful SEC Chairman, overseeing efforts to modernize regulation of the capital markets, protect Main Street investors, enhance American competitiveness, and address challenges ranging from cybersecurity issues to the COVID-19 pandemic,” Barr said in his statement.

As SEC chair, Clayton oversaw the regulator during the peak of the 2017 initial coin offering bubble and much of the aftermath. At various events, he has discussed the agency’s approach to the crypto space, including raising questions about the bitcoin market’s ability to be manipulated, size and custody solutions.

“Just speaking for myself, we have to get to a place that we can be confident that trading is better regulated,” he said last September about the crypto space.

SDNY has also been active in crypto regulation, bringing a number of cases against allegedly fraudulent crypto projects. Unlike his predecessors at SDNY, Clayton is not a prosecutor, said Politico reporter Zachary Warmbrodt.

Friday’s announcement comes on the heels of Trump announcing he would be renominating Commissioner Hester Peirce for another five-year term. The move leaves two seats vacant on the SEC, after Democrat Commissioner Robert Jackson Jr. resigned earlier this year. Trump has not yet announced who will replace him.

Commissioners Elad Roisman and Allison Herren Lee are the other two members of the SEC.

UPDATE (June 20, 2020, 05:09 UTC): This article was updated with a comment from Geoffrey Berman and additional color.