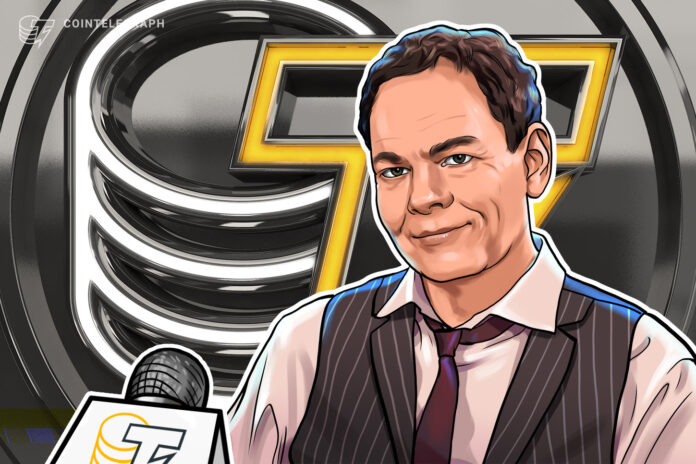 Cointelegraph Markets spoke with Wall Street veteran and host of the Keiser Report, Max Keiser, who explains the increasingly important role of Bitcoin in geopolitics amid potential “hash wars” and why he believes Paul Tudor Jones will become the biggest holder of BTC within two years.

Max Keiser: It was a software bug that froze the account for nine months. I believe it was a database contention problem. My friends at SwanBitcoin took on the challenge and sorted it out. I also sent two-dozen roses and a box of chocolates to Twitter HQ in SF, but I’m not sure that had any impact.

The United States’ national debt is now over 26 trillion. Is there a certain level at which the U.S. can default?

Max Keiser: The debt is big. But the interest on that debt is now bigger than America’s number-one budget item, the military’s 1.6 trillion spend. When the interest on the debt gets close to 100% of GDP then America will officially be a failed state. This looks like it will be the case within 5 years — as short interest rates snap back to historic levels of 5%, not the current 1/2%

Post-halving, Bitcoin’s inflation rate is now less than 2% akin to gold or the Fed’s inflation target. Is this do or die for Bitcoin now as a store-of-value?

In Bitcoin’s case, it’s Bitcoin that’s observing us. As I’ve argued before, starting at around block 300,000, I started noticing that Bitcoin was becoming self-aware. This has grown exponentially to a state of meta-awareness and so instead of asking is it time for Bitcoin to prove itself we should be asking ourselves, what do we have to do as a species to prove we are worthy of Bitcoin. This is why my Bitcoin VC fund is called Heisenberg Capital. As an aside, it’s outperformed every fund globally since inception in 2013 to today.

Will U.S.-China tensions and other geopolitical risks continue to put pressure on risk-on assets, and possibly affect Bitcoin?

Max Keiser: China, America, Russia and Iran will enter a Hash War to try and grab as much Bitcoin as possible. Iran is already mining Bitcoin. I believe they have 3% of the hash rate. This is another “Sputnik moment” where America has to decide if they want to win the Hash War or get relegated to the dustbin of history.

Do you agree that Paul Tudor Jones announcing his Bitcoin exposure is a major green-light for traditional investors? Is this a watershed moment? If not, what will it be?

Max Keiser: I think PTJ, who I followed closely when I was a stockbroker on Wall St. from 1983-1990, will be the biggest HODL’er of Bitcoin within 2 years. He is an absolute mercenary if he sees something he likes.

“The Bitcoin community has never seen the likes of PTJ and will be shocked by his take no prisoners audacity.”

You recently said that basic consumer protection is appropriate in the case of the Bitcoin Cash fraud. Can you elaborate on this?

Max Keiser: None of the hard forks and none of the altcoins will attract enough energy to survive. It’s a winner take all game and Bitcoin is not only starving alts of energy but also starving fiat money and their sponsoring nation-states of energy.

Bitcoin is an indestructible Godzilla with an insatiable appetite for energy that is transforming the world and everything that lives. Regulators should warn people about failed projects like BCH, but the more likely scenario is that both BCH and the regulators go bankrupt due to a Bitcoin evisceration.

You have also been vocal about Ethereum criticizing Vitalik Buterin for failing to understand Bitcoin’s value proposition. What does he get wrong about Bitcoin?

When I was chatting with Vitalik in London, he was still working at Bitcoin Magazine at the time, and just planning ETH. He didn’t get how absolute scarcity drives the BTC market. He still doesn’t get it.

He’s repeatedly downplayed absolute scarcity. So, I never believed he really understood how BTC works. Funny, because the problems ETH has is that it’s a centralized, variable supply fiat-substitute that has all the problems of fiat money.

“Ironically, ETH is trying to be fiat money and failing.”

So I take it you’re not a fan of Ethereum 2.0 and its roadmap?

You’ve recently spoken with Bitcoin & Black America author Isaiah Jackson on your show. Why is this book so significant and timely right now with the current social unrest in the U.S.? How does Bitcoin help blacks in America?

Major banks are now changing their tune about Bitcoin, most notably JPM. Why do you think this is the case, and will this be a continuing trend?

Max Keiser: You don’t change Bitcoin, Bitcoin changes you — per the Heisenberg Principle effect — and the existence of a self-aware Bitcoin. With this in mind, I helped direct BTC’s attention to Jamie Dimon and JP Morgan by effectively “painting the target.” The protocol cracked that nut and now Jamie’s a BTC drone. The same thing is happening to Peter Schiff.

Do you see the stock market hitting new all-time highs this year? What does this mean for Bitcoin? Your Bitcoin price target by 2021?

Max Keiser: The U.S. stock market will probably hit new highs just like the markets hit new highs in Venezuela, Zimbabwe and Iran. Not because companies are doing well but because the currencies are collapsing.

It could happen any day. Better to be a few months early than a day late. When the dollar cracks, BTC price gaps higher by $10,000 at a clip. If you’re not already positioned, you’ll be eating dirt.