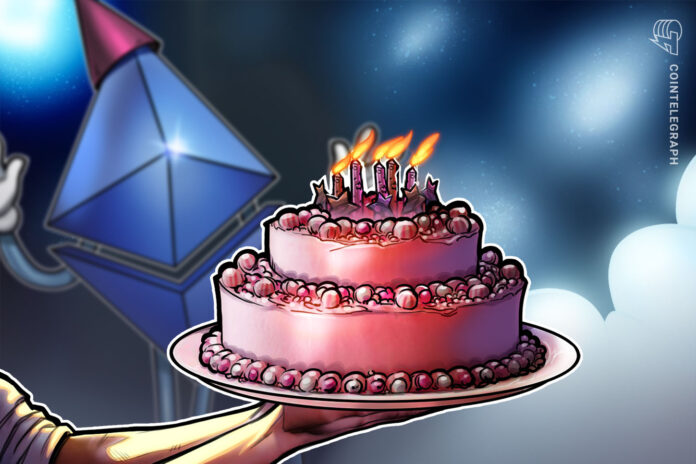 Five years ago to the month, a massive crypto project launched, forever changing the landscape of the crypto and blockchain space. Since its 2015 opening day in July, Ethereum has undergone a number of planned changes. The project’s recent move into proof-of-stake, or PoS, has faced a number of delays.

On July 28, 2015, Ethereum unveiled details showing an expected launch for Frontier, the network’s inaugural framework, between July 29 and July 30. The project started up on July 30, as planned.

By February of the next year, Ethereum had become a major player in the blockchain and crypto industry, with its Ether (ETH) asset holding the spot as the second most valuable crypto asset on the market.

Ethereum publicized a planned move into its second phase, Homestead, on Feb. 29, 2016, expected to launch on March 14. Homestead arrived on the network on March 14, as expected, according to a blog post from Consensys.

With 2017 came talk of a move toward Metropolis, a hard fork expected to hit the network in the latter days of September of that year, as per August 2017 Cointelegraph reporting. Later reporting showed hard forks Byzantium and Constantinople as the anticipated outcome of the event. By September, the event looked paced for an on-time release.

The fourth phase, Serenity, also known as Ethereum 2.0, or ETH 2.0, still remains in the works — the result of a lengthy string of delays. The team touted a January 2020 launch date, although, by July, the industry still awaits the network alteration. A move that ushers in PoS, Ethereum 2.0’s completed test network reportedly opens on Aug. 4.

Contemplating Ethereum’s journey through the years in a recent July interview, co-founder Vitalik Buterin told the host of the Hashing It Out podcast that he and the Ethereum team underestimated the length of time the update would take.