BlockShow Asia 2019 was held in Singapore this week, leaving us with plenty of stories to chew over. Binance’s Changpeng Zhao was among the speakers, and he predicted that the central bank digital currency being developed by China will be based on blockchain. Explaining his reasoning, Zhao explained how Beijing wants to push the influence of the renminbi globally in order to make it competitive with the U.S. dollar. He welcomed competition in the crypto world, saying: “Having is better than not having. Having stablecoins is better than not having them. Having Libra is better than not having it.” Zhao’s appearance followed President Xi Jinping’s calls for China to accelerate its adoption of blockchain — and the exchange boss said those who were laughing at blockchain aren’t laughing now.

BlockShow Asia 2019: Calls for clarity and caution on crypto regulation

Crypto regulation was another hot button during the two-day event powered by Cointelegraph. Some, such as Proof of Capital’s managing partner Edith Yeung, publicly criticized American regulators for leaving blockchain-based ventures in the dark — with some exchanges leaving the U.S. altogether because of uncertainty surrounding their status. Others, such as Quoine co-founder Mike Kayamori, were far more cautious. He said regulation was something that needs to be done carefully given how the industry is constantly evolving, and he warned: “The government can’t try to regulate things it still doesn’t understand.”

Another interesting panel at BlockShow focused on creating token value — and asked whether monetary gains are hindering blockchain innovation. VeChain founder Sunny Lu claimed 99% of a token’s value is normally linked to speculation, rather than the value that a solution can bring to society. He added: “This causes many startups to waste a lot of time producing and ‘selling’ the token, failing to develop solutions for where they were initially focused.” Fellow speakers acknowledged that it can be difficult to determine the value of blockchain projects, given how the blockchain industry is still very young, but they expressed confidence that it will get easier as the market continues to develop.

A quick look at some of this week’s other headlines now. India’s proposed, controversial ban on cryptocurrency is being delayed. The draft bill was expected to be introduced in parliament in the winter session that takes place between Nov. 18 and Dec. 13, but it has not been included in the agenda. Crypto businesses and consumers in the country have expressed concern because the law proposes jail terms of up to 10 years for those found dealing in digital currencies. Indian exchanges have welcomed the delay — urging campaigners to forget competition and ego, and to present their case to regulators in a united fashion. Others have said the delay proves that the government is listening and potentially reevaluating its position.

OneCoin co-founder pleads guilty, faces up to 90 years in jail

Konstantin Ignatov, the co-founder of the crypto scam OneCoin, has pleaded guilty to participating in the multibillion-dollar fraud. As part of a plea deal, he admitted a multitude of charges, including money laundering and fraud. He is facing up to 90 years in prison and has yet to be sentenced, but will reportedly face no further criminal charges for his role in OneCoin, except potential tax violations. OneCoin is known as a major crypto exit scam, and the Bulgarian-based firm remains fully operational despite allegations it raised $4.4 billion in a Ponzi scheme. 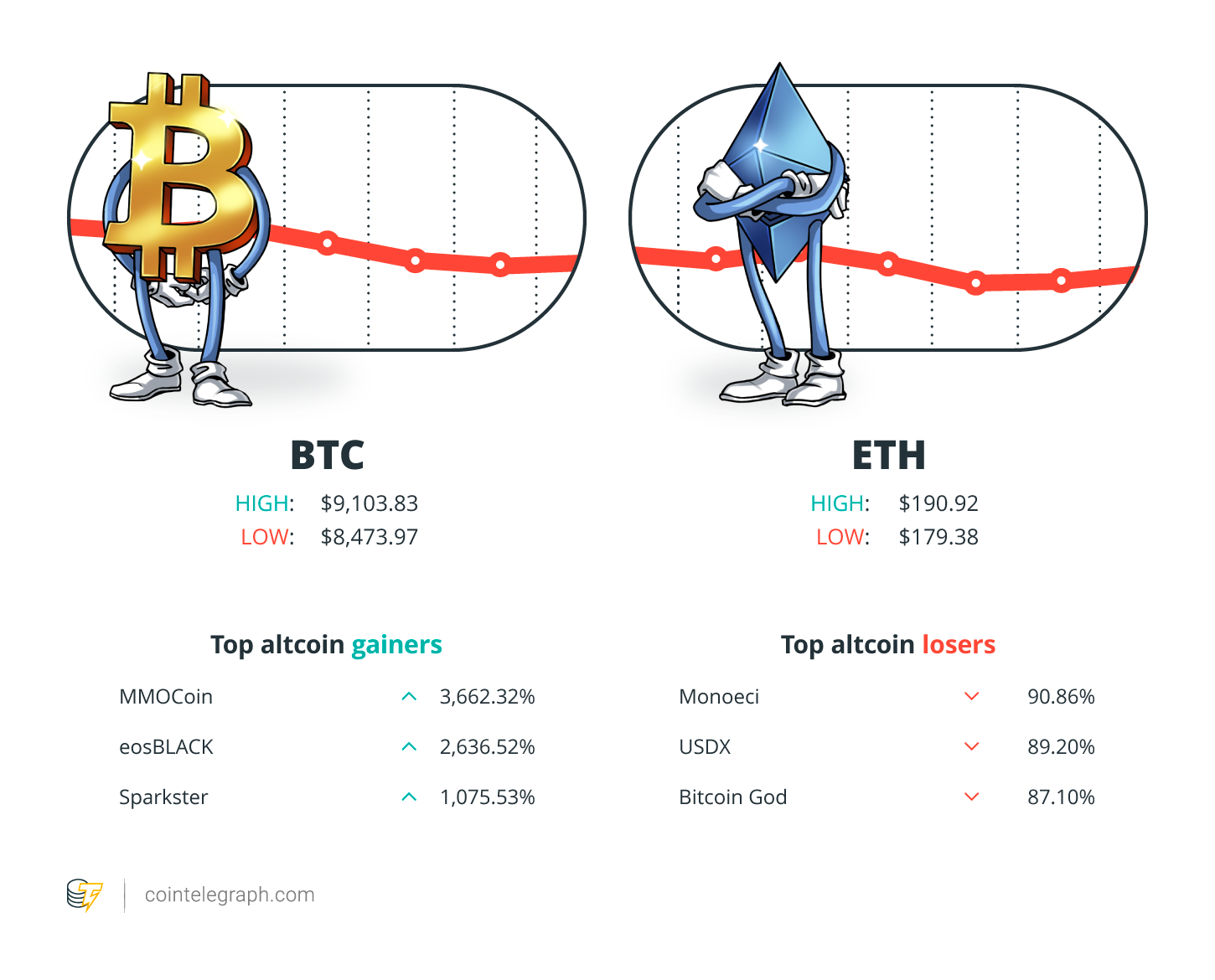 “Economics and ethics can go together thanks to decentralization.”

“We did some research, heard some discussions and conversations and one comment was it’s still complicated to 99% of the population. Until it’s more widely accepted, it’s a cottage industry or a neat way to pay.”

“99% of a [token’s value] is linked to speculation, and not to the value that solution can bring to society. This causes many startups to waste a lot of time producing and ‘selling’ the token, failing to develop solutions for where they were initially focused.”

“Bitcoin is censorship resistant money, the first in the world. I don’t believe in institutional adoption. If this happens, Bitcoin will become not censorship-resistant. Then it won’t have this feature anymore and will crash to zero.” 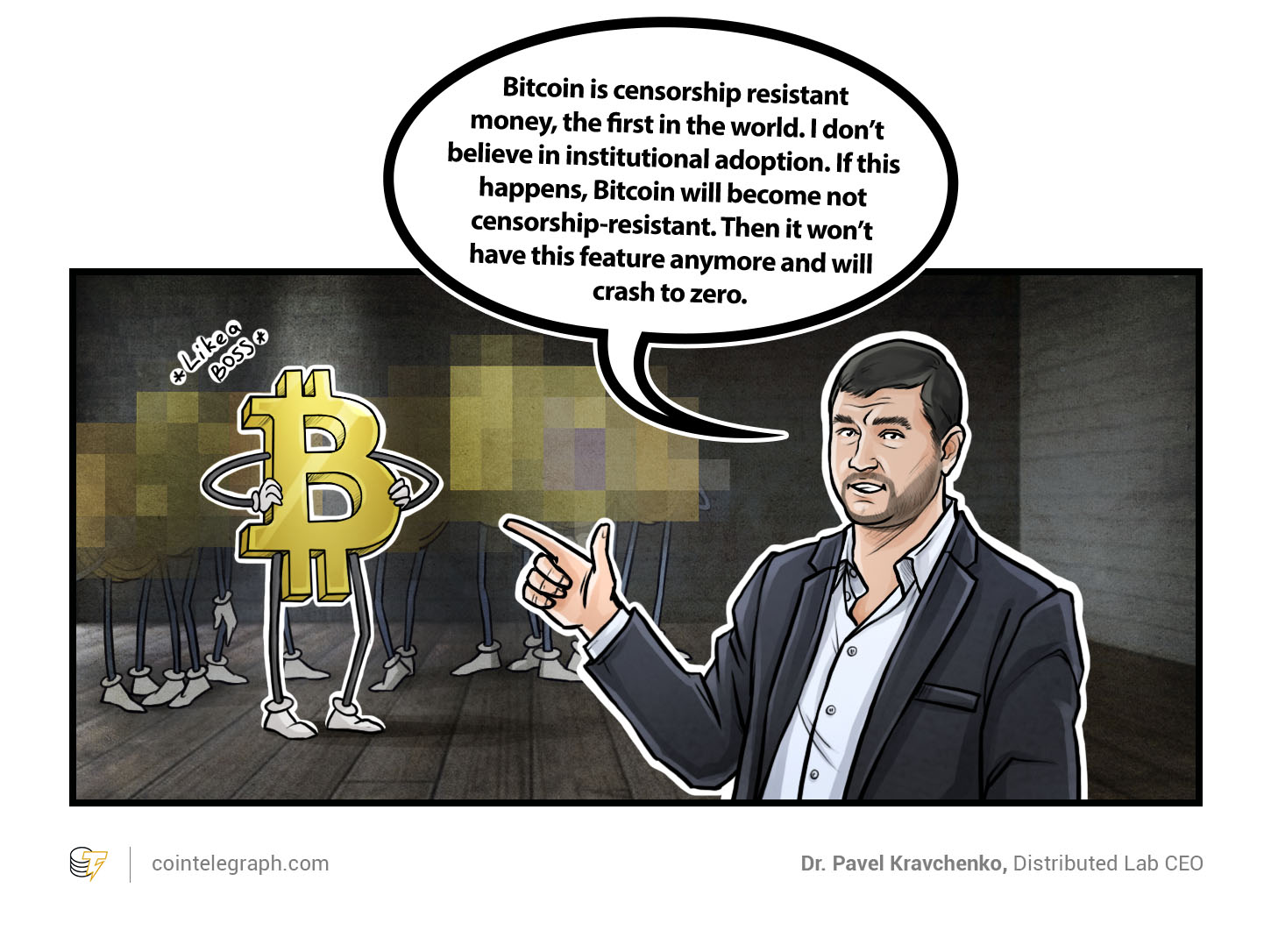 “Crypto is evolving, and the government can’t try to regulate things it still doesn’t understand. […] I am still in favor of crypto regulation, but [it] needs to be done very carefully.”

“Custody, liquidity, and regulations are the top three petitions from institutional investors jumping into crypto.”

“Don’t leave your assets on exchanges. Don’t be lazy. I’ve been into it and learned a good lesson.”

“The Chinese government wants to push RMB’s influence globally. They want RMB to be competitive with the US dollar. In order to do that they really need to push this currency to have more freedom.”

“We are not seeking full control of the information of the general public.”

“I am strongly against Bitcoin, and I think we are a little complacent. […] The currency itself is not real, with the characteristics that a currency must have.”

Expert: Bitcoin may “crash to zero” because of institutional adoption

The CEO and co-founder at Distributed Lab, Pavel Kravchenko, has warned that increasing institutional interest in crypto could see Bitcoin’s value crash to zero. Speaking at BlockShow Asia 2019, the industry expert said BTC’s position as censorship-resistant money would be undermined if major players begin to embrace it more fully — undermining its value. During his appearance, Kravchenko also said Bitcoin’s price will rise if governments around the world attempt to ban Bitcoin altogether, and that the cryptocurrency must attempt to become more private and introduce anonymizing features if it is going to remain resistant to censorship. 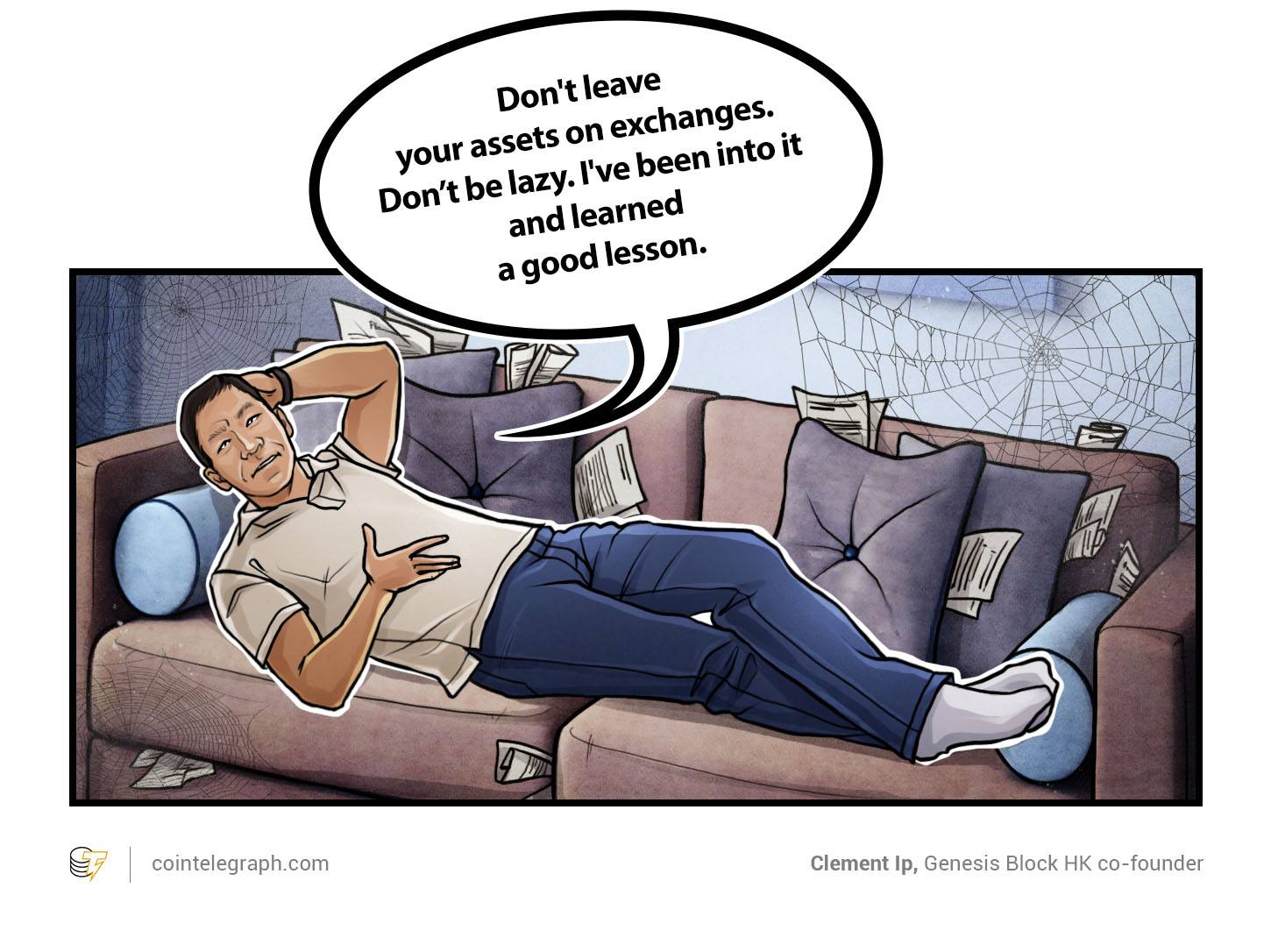 A Dutch court has ruled that Facebook must remove BTC-related fraudulent investment ads following a lawsuit by local billionaire John de Mol. The TV executive had launched legal proceedings against the social network earlier this year, alleging that the company had failed to respond to multiple requests to remove ads that used his image without consent. De Mol claimed that vulnerable victims had lost $1.8 million as a result of the campaign. The court rejected Facebook’s assertion that it is “a neutral funnel for information” — and as well as removing any incriminating ads, the company has been told it must provide all available information about the people behind them. For its part, the tech giant insists it has already taken down the ads in question, and it is considering “all legal options including an appeal.”

The U.S. Internal Revenue Service is looking into potential tax issues arising from Bitcoin ATMs and kiosks. John Fort, the regulator’s criminal investigation chief, said the IRS is collaborating with law enforcement to look into the illicit use of such machines. He said: “If you can walk in, put cash in and get Bitcoin out, obviously we’re interested potentially in the person using the kiosk and what the source of the funds is, but also in the operators of the kiosks.” This came as the number of BTC ATMs hit a new milestone worldwide, with more than 6,000 now in operation. More than 65% are based in the United States.

David Herr, the chief technical officer of the Dallas Mavericks professional basketball team, has said that only a small number of fans are using crypto to purchase things such as merchandise and tickets. Herr said Bitcoin was “still complicated to 99% of the population” — and he compared the crypto world to a cottage industry. The Mavericks became the second NBA team to accept BTC back in the middle of August.

A new white paper is packed with bold predictions about what the future holds for crypto and blockchain — and claims there could even be parallels with the Protestant Reformation that shook Europe in the 16th and 17th centuries. Cointelegraph’s Andrew Singer has more.

China walks back hardline media rhetoric toward crypto and blockchain

China’s state-run media recently turned heads by featuring pro-Bitcoin comments, with the flagship digital currency being referred to as the world’s “first successful application of blockchain technology.” Cointelegraph’s Shiraz Jagati explores whether Beijing is attempting to row back its hostility toward crypto and blockchain.

Turkey’s unexpected rise to the top of global crypto adopters

Turkey may not be the first country that springs to mind when it comes to above-average crypto adoption, but new research suggests 1 in 5 residents are familiar with it. As the country gears up to finalize testing of the digital lira in 2020, Cointelegraph’s Sritanshu Sinha explores the rapid rise of crypto and blockchain in Turkey.