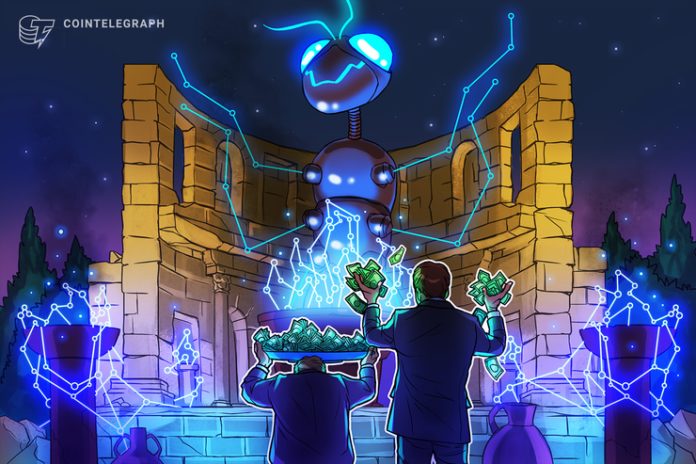 The European Union’s announcement of a new 110 million euro fund to support research on artificial intelligence and blockchain comes at a critical time for the AI industry, when issues at the intersection of privacy, security and AI are the focus of acute attention by government, the tech industry and the general public.

Blockchain technology has the promise to radically transform the way society handles data as well as how AIs are trained and taught with this data. It has the potential to create a world in which control over and reward from data and AI is distributed more broadly across various stakeholders, including the people who generate the data. But there are still some difficult technical problems to be solved in order to manifest this potential, as well as a lot of large-scale software engineering.

The question isn’t whether this funding program is timely and important, the question is whether it’s anywhere near enough. In this light, the potential for the funding to be increased up to 2 billion euros in 2021 is even more interesting news.

The AI industry in the West is currently dominated by a relatively small number of large players centered in the United States, who have gained their positions by providing users with “free” or discounted services in exchange for the relatively unfettered use of their data. By using this data to train and teach AI systems, these companies have been able to create unprecedentedly effective advertising machines, with extraordinary capabilities of using the patterns mined from personal data to influence peoples’ decisions about purchasing, political elections or anything else.

These large corporations also have numerous collaborative initiatives with governments, some of which are hush-hush and unconfirmed like Google’s connections with the NSA and some of which have been exposed such as Facebook’s permissive attitude toward Cambridge Analytica, a company working specifically for right-wing political organizations within the U.S. and Great Britain.

The Chinese AI industry looks similar, with Tencent, Alibaba and Baidu playing the roles of Facebook, Amazon and Google.

In China, the connections between tech companies and the central government are explicit and fully acknowledged. The Chinese government loves blockchain technology, but it views it a bit differently than the libertarian cypherpunks who founded the Western crypto movement. China is crafting an unprecedented synergy between encryption technology, distributed ledgers, and centralized guidance and monitoring of information flows.

The Chinese model has its pros and cons but clearly is not the path preferred by the typical citizen of North America or Western Europe — particularly the latter, where GDPR has begun to revolutionize data sovereignty in the tech ecosystem.

However, there is no disputing the added efficiencies that a centralized approach brings. It seems likely that no Western company, not even Google, has aggregated the amount and diversity of data that Tencent has, which also has the ability to crunch all this data for various purposes on its huge server farms. The company also cooperates openly with the Chinese government in using their data store and AI capabilities for purposes judged to be for the common good of the nation.

If the West is to go in the direction of greater data sovereignty, enabling individuals to control their own data and the way it’s used by AIs — and if it wants to maintain this respect for sovereignty without falling behind in the AI race — then it will need to aggressively develop tools that allow AI to learn from data without compromising data sovereignty.

The good news is that such tools exist. Multiparty computation, homomorphic encryption and other methods allow AI tools to analyze datasets — that exist fragmented across multiple locations, owned by multiple individuals or entities — in a trustless way, without anyone needing to reveal their data to other parties.

There is no fundamental reason that, right now, each individual’s personal data doesn’t go into a cloud-based data wallet that is controlled by their own private keys, wherein the individual specifically guides the use of their data for various purposes.

There is no fundamental reason that, right now, AIs are not primarily guided in their activities by the people who use them — rather than by the companies that only make it appear as though the user is in control.

The main reasons why things don’t work like this currently are related to the structure of the industry. But the industry’s structure evolved the way it has partly as a function of the constraints of the underlying technology.

Right now, for instance, one can use multiparty computation and homomorphic encryption in AI agents running in blockchain-based networks, such as many of those offered by members of the Decentralized AI Alliance (an industry organization with more than 50 members). But these tools tend to slow things down tremendously, and are thus infrequently used in practice.

The blockchain world is hard at work making its networks more efficient and introducing new technologies achieving efficiency for particular purposes via alternative architectures (e.g., there are new approaches that offer secure messaging with decentralized validation but no replicated ledger). But there remains much work to be done. And we have to remember the size of the competition. Just as for payments and value storage, Bitcoin, Ethereum and the others are competing in terms of AI with the global banking system and all its close government alliances — and among Amazon, Microsoft, Facebook and Google, two companies are already worth more than a trillion dollars, with the other two not far behind.

Funding decentralized technology projects via initial coin offerings has dried up, and initial exchange offerings are mostly relatively small potatoes with increasing regulatory complexity. Venture investors are growing fearful of blockchain companies, partly due to the length of time since the last cryptocurrency boom and partly to the failure in 2018–19 of numerous corporate blockchain projects that aimed to insert early-stage, poorly scaling technologies like Ethereum into business IT environments with serious performance requirements.

AI is going to be the single most important technology on the planet during the coming years and decades. Who owns, controls and guides the AI — in the stages before it becomes more autonomous and owns, controls and guides itself — is therefore one of the most crucial issues facing the human species. And this large, complex, multidimensional matter, in significant part, boils down to various nitty-gritty technical issues regarding the interfacing of blockchain and AI.

For all these reasons, the EU putting research and development funds into AI and blockchain development is very sensible and welcomed — but one wonders if the amounts involved should be even larger. May this program be the seed of many amazing and impactful things to come!

Ben Goertzel is the CEO and founder of the SingularityNET Foundation. He is one of the world’s foremost experts in artificial general intelligence, a subfield of AI oriented toward creating thinking machines with general cognitive capability at the human level and beyond.