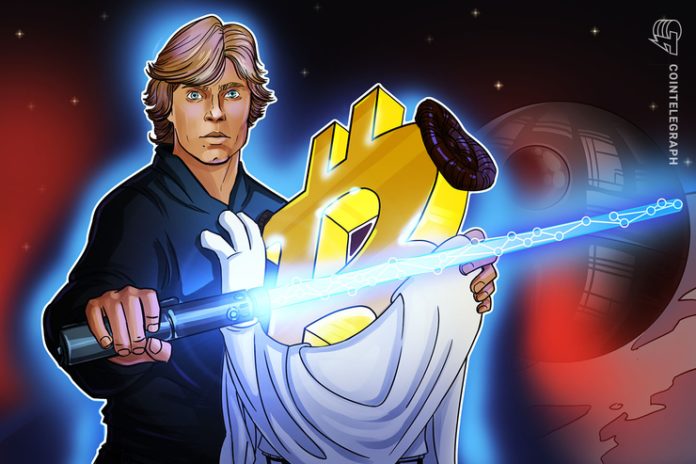 It is a period of civil war. Rebel cypherpunks are under the leadership of 900-year-old Jedi Muppet Satoshi Nakamoto, who managed to create secret plans for improving the galaxy’s financial infrastructure by removing the need for trusted financial intermediaries. The plans involve THE BLOCKCHAIN, a mystical force that binds the galaxy together.

These plans exploit a tiny flaw in the Empire’s ultimate weapon, the Death Star Lehman, an armored space station with enough centralized power to destroy an entire planet’s financial system. The battle station’s weakness is that it maintains fractional energy reserves that may be insufficient under an onslaught of leveraged debt instruments and small spacecraft. A direct hit on this tiny womp-rat sized regulatory oversight could cause a chain-reaction that would threaten the entire galaxy.

Pursued by the Empire’s sinister agents, Prince Vitalik races home aboard the starship Ethereum, the custodian of plans held in his trusty droid ERC-20 that can save his people and create a new stock market that will restore freedom to the galaxy…

Episode V – The Empire Strikes Back

This brings us to the present day.

It is a dark time for the Rebellion. Although the Death Star Lehman has been destroyed, Federal Regulators have driven the Rebel forces from their hidden, favorable regulatory domiciles and pursued them across the galaxy. The evil lord Darth SEC, obsessed with protecting investors, maintaining fair, orderly and efficient markets — and facilitating capital formation — has dispatched thousands of subpoenas into the far reaches of space… Bitcoin has been banned by the powerful Trade Federation, and Sith lords continue to hack exchanges and say “ni” at will to old ladies. Even those who arrange and design layer one consensus protocols are under considerable economic stress at this period in history.

In the resulting chaos, bands of scam artists from planet Shitcoin set up operations throughout the galaxy. The Mandalorian bounty hunter Boba Fett was dispatched to the Mos Eisley ICO portal to clear out this wretched hive of scum and villainy. Evading the dreaded Imperial Starfleet, and largely avoiding self-inflicted catastrophic off-chain governance problems, a group of droids with unlikely names like XTZ, FIL, ATOM, ZEC, ZRX and BAT have established a new secret base on the remote ice world of GitHub.

Episode VI – Revenge of the Nerds

A glimpse at the not-too-distant future.

Vitalik has returned to his home planet of DeFi, a machine world entirely populated by Smart Contracts, in an attempt to rescue his friend Money “Effing” Legos from the clutches of the vile gangster Justin Sun.

The centralized Galactic Empire has secretly begun construction on a new armored space station even more powerful than the first dreaded Death Star Lehman. This new battle station is known as BINANCE. This new weapon has the same thermal exhaust port vulnerability known as “double-spending attack via off-chain fractional reserve banking” that caused the implosion of the original Death Star Lehman. When completed, this ultimate weapon will spell certain doom for the small band of rebels struggling to restore freedom to the galaxy…

Aided by primitive, but fierce and furry mobile messengers named Kakao, Line, WeChat, WhatsApp and Telegram, the droids XTZ, FIL, ATOM, ZEC, ZRX and BAT begin quietly shipping functioning software that actually solves user problems. The Galactic Trade Federation lifts its ban on Bitcoin and launches its own blockchain-based currency backed by imperial credits. With the aid of this software and new friends, Vitalik is able to destroy the new Death Star Binance, while his teacher, Satoshi merges with the blockchain and exits his earthly form. A new galactic order arises based on a Jedi council full of midichlorian-enriched nerds who are powerful in the ways of the blockchain. The franchise is then sold to Disney, thus ensuring many sequels and vast distribution across the galaxy.