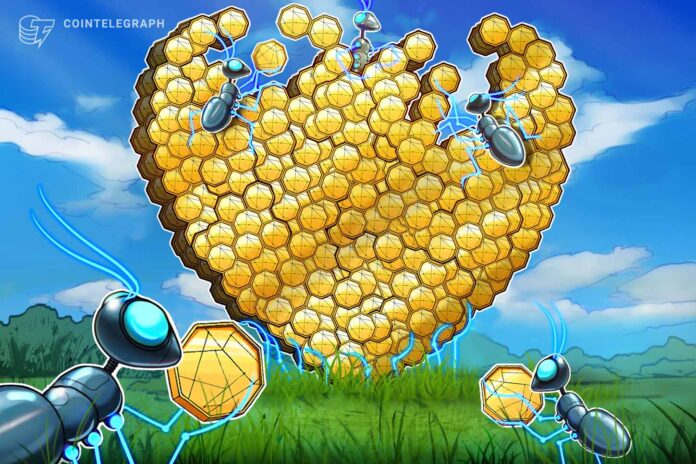 The past decade has produced an eruption in diverse giving channels and options for donating, changing the patterns of how people give. According to Blackbaud, online giving has shown steady increases, growing from 6.4% of all giving in 2013 to 8.5% in 2018. Hundreds of millions of dollars in cryptocurrencies have been donated as well, with notable donations including over $100 million to Fidelity Charitable, $29 million to DonorsChoose, $4 million to The Ellen Degeneres Wildlife Fund and many more.

From industry startups designing programs that make donating cryptocurrency easier, to charities being more receptive to actually taking those donations, there is a general consensus that the future of philanthropic cryptocurrency ventures is a bright one.

The role crypto has played in charity up until now

Bitcoin (BTC) is defined by its borderless, neutral and censorship-resistant nature, making it a comprehensive choice for use in philanthropic ventures. Bitcoin and other cryptocurrencies have even started to take on leading roles in payments that are not related to banking systems.

Up until now, cryptocurrencies have been used in numerous different ways to support charities and giving, including the launch of The Pineapple Fund, an anonymous fund that was able to rally over $55 million in Bitcoin that was then donated to charities. Recent studies about Bitcoin within the charity sector also reflect that cryptocurrency donations represent 1%–5% of the payment methods used for charitable donations, with over 100% growth in some countries, according to Funraise and Nonprofit Tech for Good’s 2019 “Global NGO Technology Report.”

Who is using cryptocurrency donations and how?

The cryptocurrency and blockchain ecosystem has seen a growing number of companies that are making it easier to utilize cryptocurrency for donations, and a number of them have achieved great heights in their accomplishments with cryptocurrency philanthropy. For example, Paxful’s #BuiltWithBitcoin initiative is on a mission to build 100 schools with Bitcoin donations and has already completed three. Alice, a social funding and impact management platform built on the Ethereum blockchain, has focused on incentivizing charities, NGOs and social enterprises to run projects transparently by making sure that they get paid more when they achieve their goals.

The Water Project is another charity that embraced cryptocurrencies early on. The mission of the nonprofit is “unlocking human potential by providing reliable water projects to communities in sub-Saharan Africa who suffer needlessly from a lack of access to clean water and proper sanitation.”

The most recent real-life use case for cryptocurrencies and charitable donations came in early January when the COVID-19 pandemic saw nations and communities facing shortages of personal protective equipment and medical support and having an overall need for immediate assistance.

The Stellar Development Foundation launched a program to match donations given in Stellar Lumens (XLM), which was powered by Stellar-based Lumenthropy, a fundraiser that supports charitable organizations. Additionally, The Giving Block announced the start of the #CryptoCOVID19 alliance, and Paxful launched the “Africa Fund” to ensure PPE, supplies, water and other necessities were provided to communities throughout Africa.

Blockchain has made numerous promises, from ideas of financial freedom and a more connected world to adding security and transparency to how we collect, share and use data. But one big promise made by blockchain is its ability to ultimately reduce financial overhead costs by eliminating or reducing the roles of intermediaries.

By further incorporating both blockchain technology and cryptocurrency donations into the philanthropy sector, we will see various improvements, from the ability to track how a charity is actually using its donations if completed on the blockchain to adding another level of transparency helping to source out corruption.

By implementing systems that depend on blockchain and cryptocurrencies for the completion of philanthropic ventures, we will be able to reduce the fees that are usually associated with international transfers and ultimately provide more immediate financial support to victims of natural disasters or unexpected tragedy. This will also encourage more contributions and more money going to charities, while also allowing for the championing of good actors in the charity space for their transparency.

As we strive to make the future a more inclusive place, and the ownership and overall acceptance of digital currencies become more prevalent, crypto philanthropy will undoubtedly take its place as a large part of charitable giving moving forward.

Ray Youssef is the co-founder and CEO of Paxful, a people-powered marketplace for money transfers with anyone, anywhere, at any time. The company, founded in 2015, has over 3 million customers globally that you can instantly buy and sell Bitcoin with — using over 300 different payment methods. Aside from making Bitcoin accessible, Ray also launched the #BuiltWithBitcoin charitable initiative that aims to show the humanitarian capabilities of Bitcoin. He’s a New York City native and has been a serial entrepreneur since 2001.